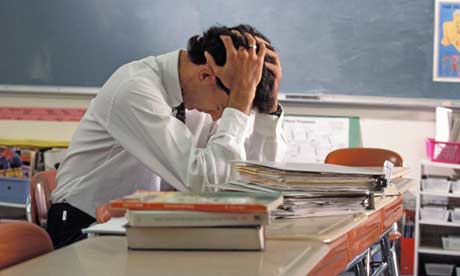 Behavior management is a struggle for many teachers. In order to manage student behavior, it is important to understand WHY maladapted behaviors exist. On this website, I will share both general concepts about behavior and methods to help manage maladapted behavior.
The first section of my website focuses on the function of behaviors and how to reinforce them. I will go through the four functions of behavior: Attention, Escape/Avoidance, to receive a Tangible reward, and Sensory stimulation. Then I will review a Functional Behavior Analysis (FBA) to understand why a behavior occurs and to identify the function of the behavior. Ways to collect data are reviewed, including ABC charts and frequency charts. Replacement behaviors are discussed as behaviors that meet the functional needs of the maladapted behavior, but in an appropriate way. We will then review reinforcement as something different than punishment. Punishment decreases a behavior, while reinforcement increases a behavior. There are basic rules to using reinforcers, and several of those are shared.
The second section of my website focuses on Behavior Intervention Plans (BIPs) and kinds of differential reinforcement plans. These plans use reinforcement in different ways and include DRO (Other behaviors), DRA (Alternate behaviors), DRI (Incompatible behaviors), DRL (Lower-rates of behavior), and DRH (Higher-rates of behavior) plans. I provide examples of a BIP for a student, Joe. In this section I connect behavior plans to PBIS and RtI. I will also discuss how to fade a student off of a behavior plan.
The third section of my website focuses on working with students with autism and anxiety.
The final section provides other tools for behavior management, including extinction, modeling, and providing clear expectations.

There are 4 functions of Behavior: attention, escape/avoidance, tangible reward, and sensory stimulation.
1) Attention - Students will try to gain attention, either from their peers or from adults. This does not have to be positive attention. Negative attention is still attention.
2) Escape/Avoidance - Students will try to avoid a situation that they do not want to be part of. This occurs often in schools, partly because students may want to avoid certain subjects. It is important that the consequence does not take them out of the situation they wanted to avoid or else that will reinforce the maladapted behavior. Before setting consequences in school for these types of behaviors, consider whether or not a student is avoiding the academics because they need to learn something, rather than they just "don't like" a subject.
3) Tangible Reward - Students will try to gain something tangible that they like. This could be candy, a toy, or extra recess. Token economies play into students' desires to gain something tangible.
4) Sensory Stimulation - Students will do something because it feels good. Replacement behaviors must provide the same sensory stimulation, but in an appropriate way.

In addition to ABC forms, teachers can collect data at different intervals of time to record how often behaviors occur. This can give insight into the behavior (i.e. - it only occurs on Mondays or the end of the day), as well as the frequency to determine whether an intervention has worked. 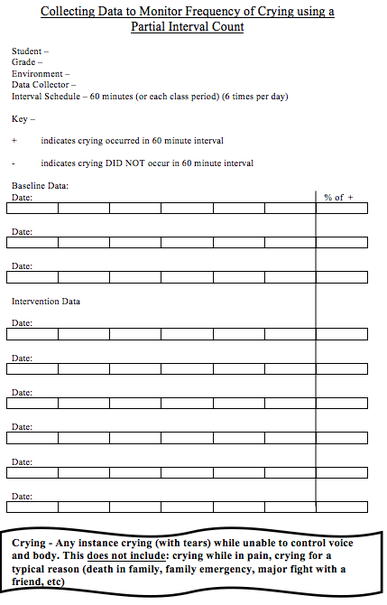 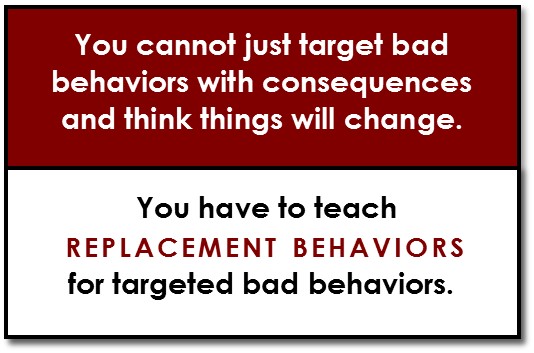 Simply put, a reinforcer is anything that motivates a person 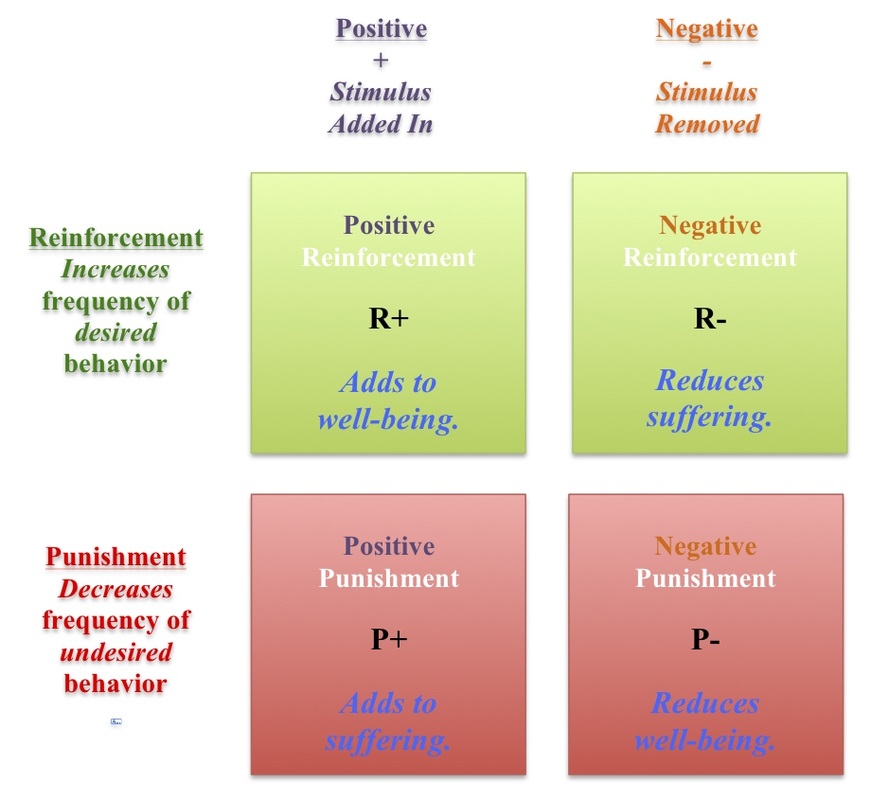 This image shows the differences between punishment and reinforcement, as well as positive or negative versions of both.

For a reinforcement plan to be effective, the reinforcers should powerfully motivate a student to demonstrate the goal behavior, or to eliminate a maladapted behavior. For more information, please see this video of a lecture about the MAS. 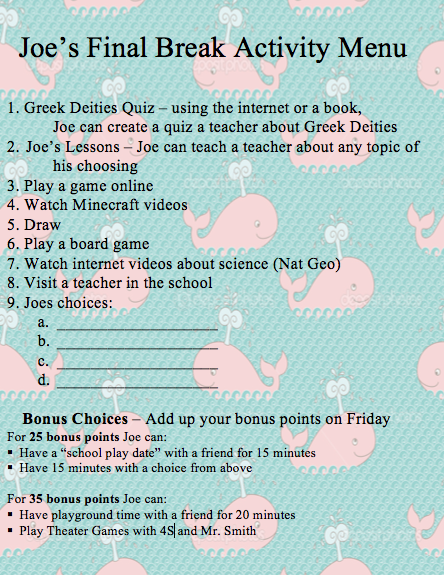 This is the Reinforcement Menu that I created for Joe. The reinforcers are specific to Joe's interests and were chosen because they are true motivators to him. There is also a section where Joe can choose new reinforcers weekly. The bonus checks exist to motivate Joe to choose the incompatible behaviors to crying more often that his check sheets will allow, therefore providing him with extra reinforcement. 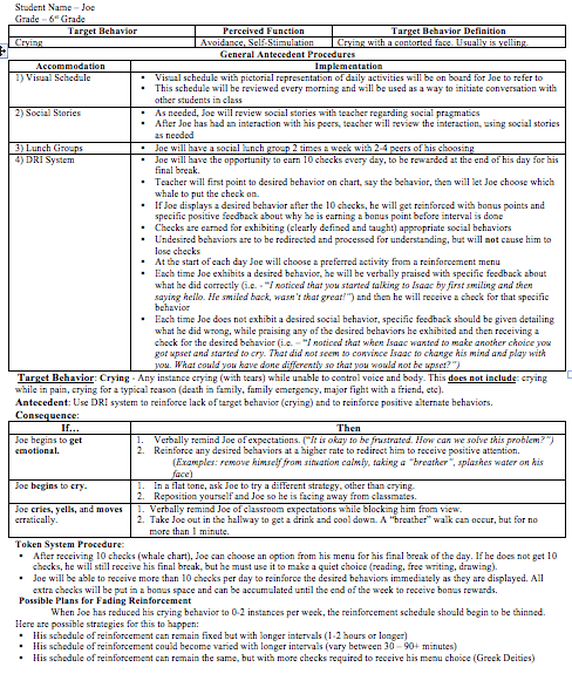 This is an example of a behavior plan that I created for a former student, "Joe." 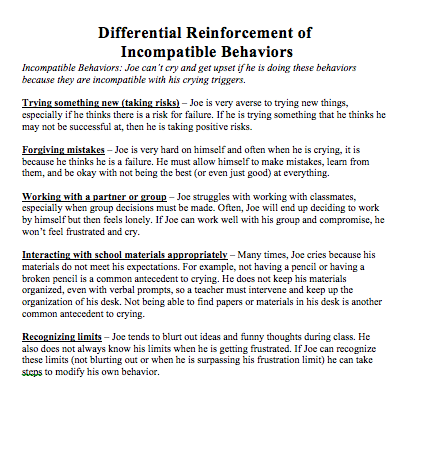 These are the incompatible behaviors that I would reinforce to reduce the appearance of crying. 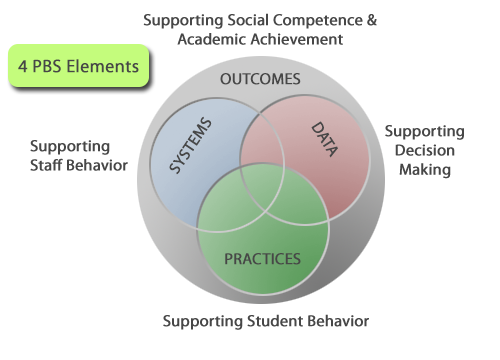 In a PBS system, DATA is used to support decision making. It will lead to PRACTICES that support student behavior. In order to implement effective supports, SYSTEMS must be in place to support staff behaviors. Finally, the OUTCOMES are meant to support social competence and academic achievement.

Once a behavior plan begins to make a positive impact on the behavior of a student, a plan should be made to slowly fade out this support. One way this is done is to reinforce behaviors on a different schedule. Maybe more checks are needed to receive a reward. Maybe checks are given at a longer interval or a varied (unpredictable) interval. Another way behavior plans are faded is by moving from extrinsic, tangible reinforcers (food and praise) to intrinsic reinforcers such as pride and enjoyment of the work.
Fading reinforcement plans is incredibly important because then the behaviors can be internalized, rather than always relying on a reinforcer. 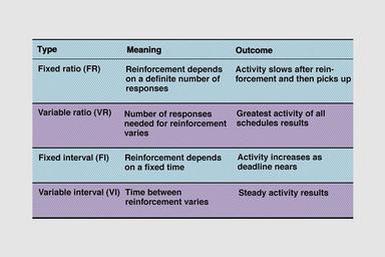 Behavior plans can be very helpful when working with students with special needs. They provide consistency and an RtI approach that can help find the correct interventions.
A note for working with students with anxiety: consequences are tricky because the student is NOT in control of their behavior when they are having an anxiety attack. Teachers and their anxious students should instead focus on managing the antecedents that cause anxiety-based maladapted behaviors.

There are many strategies that teachers can use to manage the behavior of students. Some of these strategies could be implemented as a whole group, others work best on an individual basis.

Extinction - Extinction refers to the process of eliminating all kinds attention from maladapted behaviors. Extinguishing behaviors should ONLY be used if you can tolerate the maladapted behavior increasing for a time. Without the attention, the behavior often increases, with the attempt to get more attention. An example of correct use of extinction is ignoring when a student calls out. For a while, the student may call out more frequently (to get the attention they need), but eventually, calling out will not get attention, so the student will start raising his/her hand (thereby receiving attention in a positive way).
Extinction should NOT be used when the behavior can not increase. An example of when NOT to use extinction is when a student is hurting themselves or others. This behavior can not increase, so therefore should not be extinguished.


If...Then... - These behavior/consequence agreements can be used as a whole class intervention. The If...Then... charts define maladapted behaviors and their consequences BEFORE a behavior is exhibited. This provides clear expectations for all students. For example, IF you do not complete your homework, THEN you will have a working snack to complete it. When behaviors and consequences are clearly defined, students will know what is expected of them.


Behavior Matrix - This is a chart that is displayed in a classroom that defines behavior expectations in each area of the classroom or school. See example below:

Levels of Behavior - This is a simple system to set up in a classroom. The teacher identifies different types of behavior that can occur during the school day. Usually this focuses on voice and volume, but can be modified to include movement, speed, and focus levels. 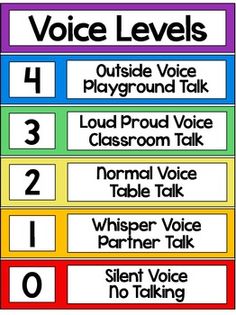 Modeling - Teachers should model positive interactions and behaviors. A lot of power can come from students witnessing a teacher model correct behaviors. Modeling can be done quickly, on the stop, and shows concrete alternate behaviors.


Knowing your Students Well - One of the best ways to manage behavior of students is to know them very well. Knowing students' triggers and successes can help avoid potential problem areas and can help build upon their known strengths. This is an example for "Joe": 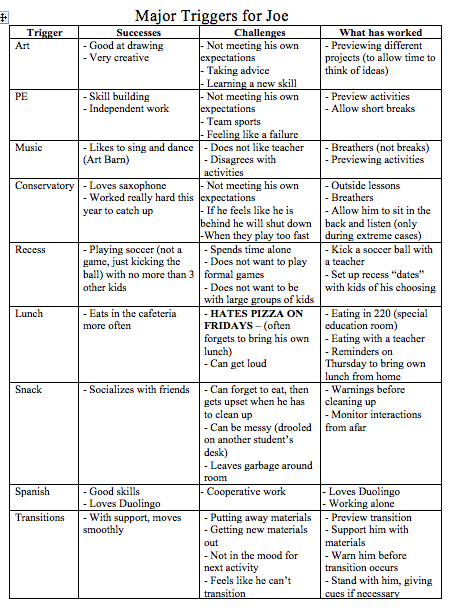 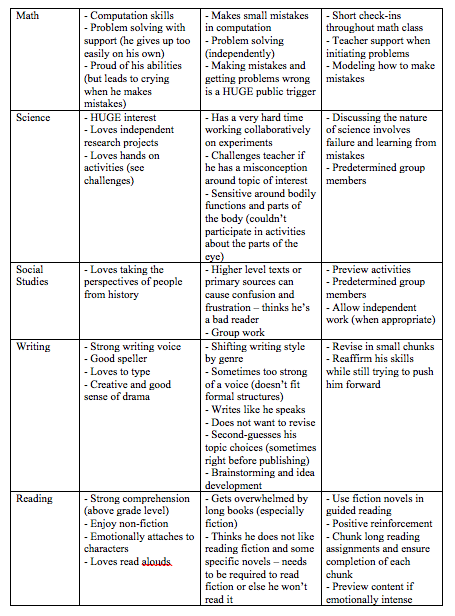 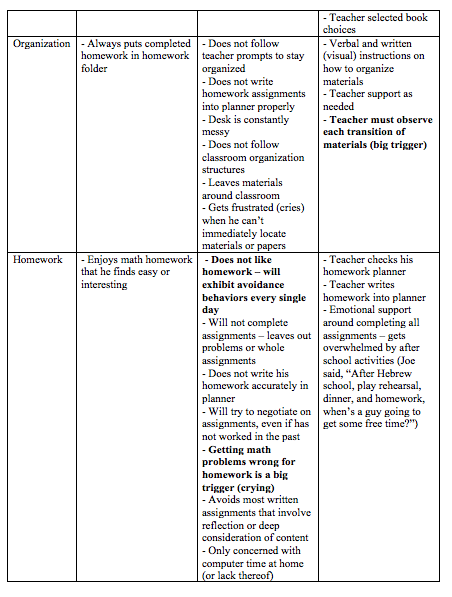